Pf-dup on a PfSense gateway for separate distributed IDS sensors

Pf-dup on a PfSense for distributed IDS sensors

This is a lab-report of a network security monitoring experiment. Network intrusion detection system / network security monitoring architectures[1] need to mind SPAN[2] ports. Core switches and hardware load balancers don’t allow for many different mirror ports[3]. But we usually aren’t interested in getting all traffic of a modern multi-Gigabit network. It can overload our network analysis tools so that it can get very hard to handle the data.

Pf-dup[4] is a BSD Packet Filter feature, that allows for selective traffic duplication. It’s over a decade old, but I haven’t used it until recently. With this feature (or the Linux iptables TEE target feature) we can perform targeted network analysis[5].

The setup is relatively simple. The virtual topology has got a designated vSwitch (Internal) that switches vLAN 42: 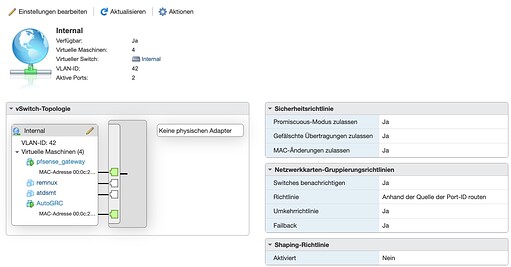 You don’t need to do this with VMware of course. You may not even need a switch since the duplication will use an IP target. It’s however preferable and can keep mirrored traffic separated.

Two switch ports are interesting for this experiment:

Once connected we can configure this interface with the static IP 10.1.1.1/24.

We don’t need an upstream GW, because we don’t intend to route this.

On the Linux receiver this should be straightforward:

One of the reasons why I keep up this website is, that other people documented their ideas as well. I found a Tao Security[6] blog by Richard Bejtlich from 2005 about this

pfSense creates a copy of the generated rules in /tmp/rules.debug. We can simply add two lines to our pf config (at the end):

Then we may enable the selective traffic duplication without interfering with the pfSense rules:

I asked about that specifically, because pfSense manages the pf rules.

How to add pf Dup-To rules

Hi, would someone know how to add a pf bridge in order to copy traffic? I am fine with getting into the command-line etc. since this is for testing. I'd like to avoid a conflict between such custom rules and the pfSense firewall management. Dup-to is...

On the Linux receiver system, we can test the traffic duplication using tshark.

Why not run all of that on the pfSense GW?

First of all running complex code (like network packet parsers) on perimeter systems isn’t in line with sane security objectives that are concerned about the (software and network) integrity. We are parsing arbitrary data on a critical system; with more or less random code.
Granted, if you need preventive functions you may not have a choice. But we should be concerned about the software integrity of central network gateways. Separating the systems is key: the resulting analysis can result in automated firewall rule changes as well.

We can think beyond pf(Sense): with such an approach it’s possible to perform targeted in-depth security tests, for example on TCP port 80. But we may not need to be that selective and could mirror more.
– Maybe in order to look for long-lasting connections, that indicate command and control (CnC) channels from Malware. Maybe with tools like Rita[7], Zeek[8] or Suricata. Lots of options, which we can try out on a separate Linux system.

We could use a SPAN port and mirror Gigabits of traffic to a BSD system, that can distribute the traffic to specifically configured sensors. It’s also possible that the sensors reconfigure the traffic distribution on demand (it’s not complex).
There will be limits to the performance of such a system, but it’s much better to know what to look for than to drown in network data. 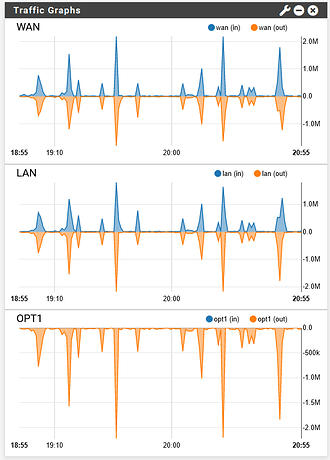 This topic was automatically closed after 2 days. New replies are no longer allowed.