… well, not really free. But the current subscriber benefits for VS Pro are a nice-to-know thing. As devs we should also test and tryout new stuff. 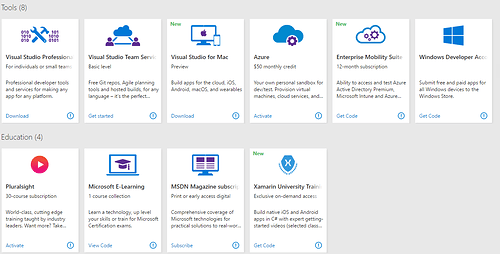 The 50 USD / month Azure subscription allows some testing. For example the new Windows Server 2016 Nano instances look interesting for some use cases.

You can also get Linux servers there… free shells. Powershells

Btw. the new Microsoft Bash for Windows does not support 2016 Server yet. So the shells might not be powerful…

I assume you can also fire up some blog system or some sort of build server.

The Pluralsight Visual Studio courses have nice materials. One of the issues with the Microsoft Imagine “courses” is that it’s full of entry-level materials. Pluralsight has a bit more to offer: C# courses for example.

Concurrent Collections and Asynchronous Programming for example. That’s something I see to an increasing degree in code I review. I am not a coder, but it’s always good to remain up to date. I think last time I developed C# code for living… that was 4-5 years ago

When Jon Skeet was still a thing.

So with Visual Studio Pro via MSDN you get 3 months of videos, where some dude types code and speaks fast. And 50 bucks for a cloud environment, that tries to be like AWS.