For the astute pioneers of experimental system administration and hallucinogenic programming… here is the newest Linux Without Borders (since 2017 A. D.). The journal you never signed up for. Which reminds you how broken things are. And which makes sure you get to enjoy the peace and quiet of the formidable ergonomic always responsive Windows Remote Desktop experience! Because Linux on the Remote Desktop is dead. Always.

We used to install Slackware from FDD (Floppy Disk Drive)

There is an almost military elitism amongst our young and therefore keener adopters of Kali Linux, which used to be called BackTrack when I still behaved like a brat. Online.
It is suitable that Kali Linux is featured on the Microsoft Windows AppStore as a collectible now. And most users are collectors… 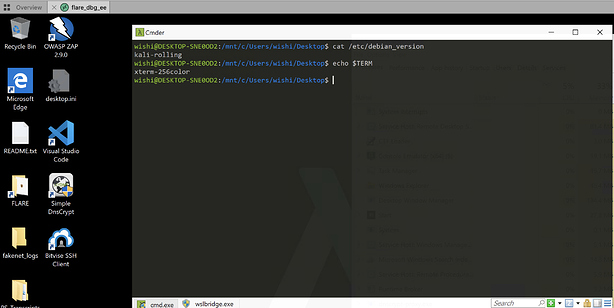 Look at my $TERM, my $TERM is amazing.

Not only will you be able to run Kali Linux rolling in an antique xterm-based emulator[1] in 256 colors[2]. You may also be able to run it on a Preview-version of a Terminal Emulator[3] developed by the Blue Giant itself.

With split-screen and other 90ies features, to make you feel like you are on a Nintendo NES. That was a gaming console, in case you didn’t know. Feels like home, back then. Not that other Windows Terminal emulators didn’t have that feature for a long time already… 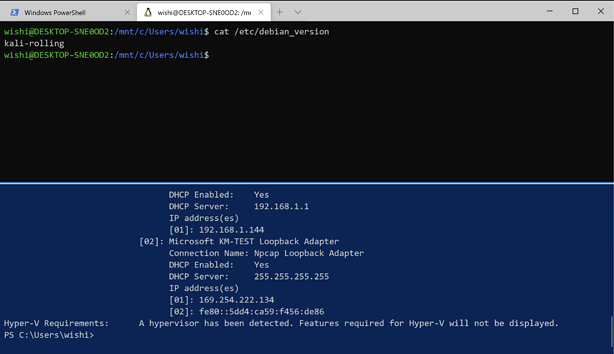 Kali Linux in a split-screen…

Throughout the last decade, our Cloud-resisting fraction of atavistic Unix-greybeards insisted that Virtual Network Computing (VNC) would be able to deliver a proper user-experience.

Not only RDP has proven them wrong, given that latency is crucial for Thin client setups.
With Kali Linux on WSL now all of a sudden we have a Linux-based pentesting distribution available, that can painlessly be accessed via RDP. And this dear fellow is new. Because of ClearType Font Smoothing the output of the forwarded Terminal emulator is readable remotely and remotely readable at the same time. Imagine that. Readable text - 2020. One has to have certain standards. Remotely.

And not only can you stream a Terminal emulator window, but you can also stream anything graphical on an X Window System on Windows. – Like Xming[4] or others. Fantastic! Isn’t it? It took us decades of arguing that VNC wasn’t enough. And we were few.

Are you saying that 2020 is not only the year of Linux on the Desktop but also on the Remote Desktop?

The problem with graphical OpenSource userland development never was the lack of standards. It died because WebApps are easier to develop and can be maintained progressively; speaking of ruthless consolidation trends like Electron[5].

The majority of Desktop applications on Linux indirectly depends on proprietary components. LibreOffice isn’t entirely OpenSource, Java JVMs may not be. Firmware blobs empower close to every hardware. Collaboration-software like Slack, Zoom or Goto-Meeting… 3d drivers… There is surprisingly little OpenSource software that supports your work on Linux. Of course, there are some psychopaths who claim that Vim is an IDE. But every now and then they also use Chrome to copy-paste new source-code from the internet.

WSL is the first nail in the coffin of the Linux Desktop. Others will follow. Some things get buried alive, and to be honest… that’s ok. The Linux community built many borders and acts like a pseudo-elite group of “owners of technology”. While in reality, they couldn’t even “press any key” without a firmware blob.
– There’s a lot of crap in SystemD, that needs to be burned before we can bury it. But as long as Lennart[6] only torments Unix greybeards everyone gets what they deserve.

Screenshot via RDP - look how crisp the fonts are…

The less Linux on the front, the better. Does the L in WSL stand for Lennart?

A lot of Virtual Machines interfere with network scans and people use them anyways. The accuracy of the results is never assured in any security assessment. I wouldn’t use it to map large IP ranges or to do internet surface scans. But people will do that…

masscan is a tool for internet-surface scanning. It’s available in WSL Kali (from the MS AppStore). Should you use that?!

WSL comes with a sparsely documented architecture, like many of these newish entrepreneur projects from Microsoft, that pop up since the GitHub acquisition. We use it anyways… from a certain angle we were way too serious about this Linux thing in the first place. Maybe Tanenbaum was right after all.

The story behind the industry-demand for “Linux skills” isn’t about the Desktop experience. Or good documentation… Or Minix.

Next, our DevOps engineers get local admin rights on their Linux Desktops to run docker. Makes them Helpdesk, Sys Admin, Dev and Network Admin. Why study all of these things?!

In case you get serious storage or network infrastructure requirements you can add Cloud-services (which have the proprietary storage or network overlay extension that works with these weird things like Kubernetes or Kartoffelsalat). Keep in mind that your DevOps team is small by intention. What motivates the introduction of automation, you know. Automation that will unlock the next century. Progressive, isn’t it?

What do we learn - progressive wrap up - the L

The future of Linux is Terminal-based. You won’t see much of it on Androids or Chromebooks during the 2020ies[7]. Besides ClearType’d text within a terminal of course.

Further good news: if you setup FreeRDP with RemoteFX[8] you win: remotely access your Windows 10 via RDP, including the WSL, including the X Window System within. That is Linux Without Borders, literally: we were unable to decide which kind of Desktop-environment borders Linux should have. So… in the 2020ies there won’t be any. Problem solved.

We have Linux on the Desktop. Just, it’s the Windows (Remote) Desktop. That’s how DevOps works: we put it in an (AppStore) container, and we shipped it. We removed all architecture concerns. And automated the deployment (via the AppStore).

What does the L stand for again?