Big Bertha for Big Data - Laptop review for the different

The philosophers say that evolution’s greatest tool is mistakes. But mistakes take time. Unless…

I got a new work laptop, an Alienware, 13" R3 OLED. I think this qualifies as a business laptop, although it’s classified as a gaming laptop. As hackers it’s up to us how we use technology.

PC gaming isn’t a nerdy thing any more. I work for a gaming company, and I know the numbers. It’s you, your neighbor and all their friends. You even play together, although you might not know it.

Pics or it didn't happen[tm]

I put odd shots here… there are enough product presentations of the laptop. 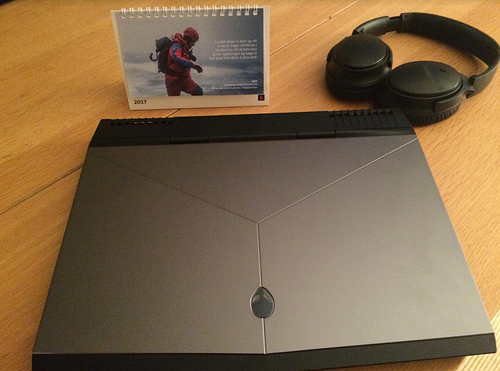 It’s actually not a 13". A 2012 MacBook had 13,3". This Alienware has 14,3, if you include the rear fan. In the specs they only list the display size. Smart move from marketing. Not smart enough, suckers! 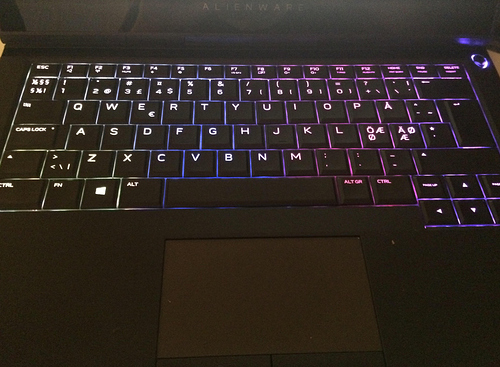 Ok, this is sooo European. Or not. Maybe it’s the Papua New Guinea variant? Or Salomon Islands? Do you know?

I tend to use mechanical keyboards. I have a G810, because the switches have a real and mechanical feeling. That’s very good for coding. Coding is hard work…
The Alienware laptop here uses TactX steel reinforced switches. Yes… steel. Man of Steel style steel. Hardcore.

I had a T530 keyboard, which died after 1,5 years (got repaired). Lenovo likes plastic, like Acer and other middle class vendors.

Lenovo is a middle class vendor these days. For servers and laptops. Deal with it. Plastic is their position. They started with the Thinkpad Edge series, and nowadays they are all on the Edge. Of being too bad. For a while Apple caught the modern switchers. Because you can have VMware Fusion, and there is MS Office for Mac OS X. But Apple also lowers the quality now, with the MacBooks in the post Steve Jobs era. - Just the useless Touch Bar.

Don’t get me wrong. The Touch Bar is a nice one… for an art project. But not for device ergonomics. And it’s impractical, because it’s auxiliary. If you do touch, do it right. Omniscient that is. UI wide. No exclusions.

So is this Alienware less plastic and more foundation? 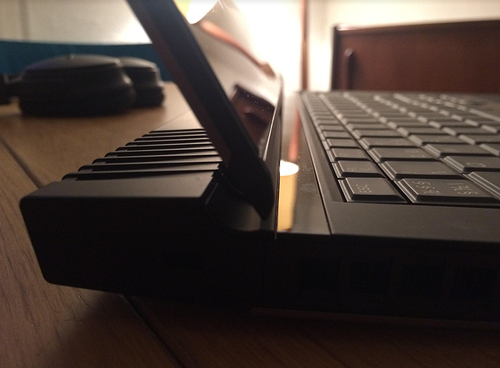 Two things: the OLED display mount looks scary to me. I didn’t see that before I bought it. Solid, but complex. And it’s glossy, but I knew that. I had a MacBook for years, glossy display. The OLED display here is an eye catcher though. Good colors, and touching a UI is a thing. We have 2017.

You can see that there is a cooling system, rear mounted. That is for the Nvidia GTX 1060. I have heard a slight high-frequency noise which has been emitted from the fans when I booted the system up for the first time. The weight and motion bearing hinge has plastic on the outside. Mehhh. Not good. 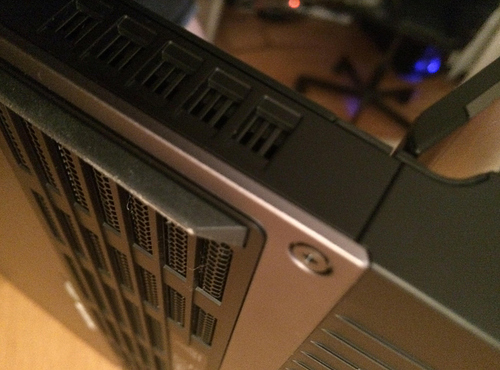 Especially because they used some aluminium at the back, to make the design more solid.

You can also see that there are air passages for the cooling system. So noise… Alienware is known for loud devices, which get very hot.

In short: it gets loud if you push code through the compiler. Or hot if you put load on the GPU. But you need to do this, in order to cause this. The laptop has a hybrid gfx card. Normally you’ll only have the Intel HD 530 online. And the CPU at 1 Ghz.
That means normally the noise level is lower than a bird, which sings outside when the window is closed. It can become like a snarling Dachshund. And the German Teckel (Dachshund for hunting) have a certain strength.

Summary: it's a Teckel

So yes… the 13" Alienware OLED is the Teckel among the professional / powerful 13" laptops. You can get a Poodle from Lenovo. Or a Pug from Apple. Simple as that. But don’t touch the Pug. The MS surface… what… no I am a dog person. Dogs deserve better. I think the Surface series is for cat persons…

In a cloudified sense - can't we go thin?

This is Tekkel is available with 32 GB (13" and 32 GB is hard to find nowadays). The GPU comes in handy for Deep Learning and ML, with Theano and Tensorflow. These libraries make use of the GPU. I prototype on a laptop. Other libs make use of the i7, like Dask (Pandas style Python stuff), scikit and so on.

The memory comes in handy for VMware Workstation, vagrant & Vbox… Docker etc… IDEs, VisualStudio, Java stuffs and the other memory hogs. Same for the SSD.

The OLED touch screen comes in handy for taking notes. Autodesk SketchBook, Evernote, OneNote…I use Kanban style Sticky notes. Kanban is good if you also do some management and push multiple things in parallel through company processes. It allows you to track the state and avoids confusion. One click - one touch - and I can see what I need to communicate and why. No, it’s great. The i7 scales down and the Nvidia GPU goes offline if you don’t put load on it.

Derived specifications for the tested build

The 13" R3 OLED isn’t exactly bantamweight, but I workout

Some more or less random tests

First of all I upgraded to Win 10 Enterprise, and shut up some of the telemetry and Alienware useless-ness.

Then I put Chocolatey on it, for software installs. I exclude FF, Chrome, and the MS tools from choco, for obvious reasons. They have their own updaters, and don’t need to be managed.

VMware is known for a high disk IO consumption. VBox is less popular for that, but of course it also commits to disk. 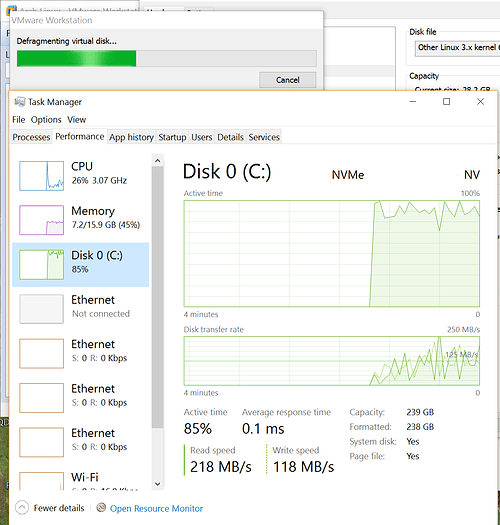 This is an NVMe SSD, PCIe.

One issue is that the laptop only has got 1 USB 3 controller, and 2 ports. Which means that the bus latency and the bus throughput will be divided. In case I have a VM on an external drive, it will not be fast.

Tobii Eye tracking - WTF. Put in a fingerprint reader like everyone else, if you want biometric logins. Not some stupid eye tracker gimmick, that spits “I am from Toys’R’Us” in your face.

Windows 10 cannot really deal with resolutions larger than 2000 pixels, mostly due to DPI. Non DPI aware apps look bad. If you have displays with different resolutions, this becomes worse. If I move an app to the external 4k display, the Window clutter gets huge and the fonts become unreadable.

Also if you RDP into other systems using max res that can be a problem. If you lower the resolution it looks dirty.

Best. Check the details. No one buys such a laptop, and just reads the summary.

In the mean time I learned:

Check the drivers here. I am not happy with this. 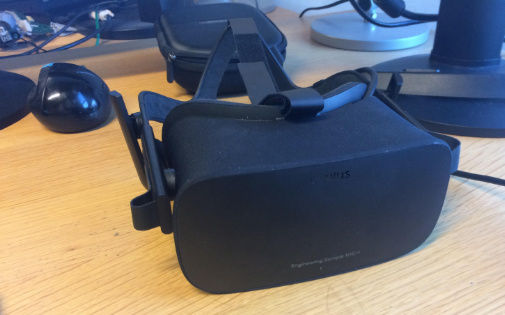